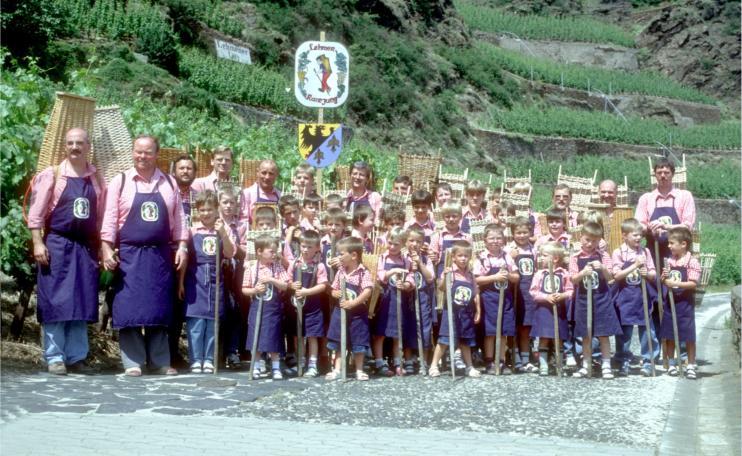 The Lehmer Razejunge are an active organization. They promote the culture of traditional wine growing in the area of the Lower Moselle. The main purpose is the fostering of local history, traditions, customs, and culture.

The Razejunge bring children and young people close to wine growing traditions in the cultural landscape of the Lower Moselle. They accompany students of the elementary school St. Georg in Lehmen to practical lessons in the vineyard. They support book readings and organize holidays for school and kindergarten children. In addition, they have published a book for young people by the well-known German children’s book author Stefen Gemmel: “The Treasure of the Razejunge.”

The Razejunge are engaged in conservation and environmental protection. Through different projects, they foster the diversity of species of fauna and flora in Lehmen's Würzlay Vineyard and maintain old vineyard terraces and stone walls, which preserves small biotopes in the steep slopes of the vineyard. In Lehmen's Würzlay Vineyard, the Razejunge farm their own Riesling vineyard on the steep slopes, the Razejunge Vineyard, with peach and fig trees, and the largest working lavender plantation of Rhineland-Palatinate.

From June 2014 until the early summer of 2015, more than 3,200 Lavender plants (Lavandula angustifolia officinalis) were planted on former brownfield land of the Razejunge Vineyard. Butterfly populations, bees, bumblebees, and reptiles have multiplied and resettled since then. The Razejunge of Lehmen have also set up beehives in their vineyard and produce lavender honey from the Lower Mosel, which is a rarity.

The Razejunge plant lavender to prevent the old, fallow areas of the hillside vineyard from becoming overgrown with plants, such as blackberries. Promoting local fauna and flora is another primary focus, which beautifies the landscape and positively impacts regional tourism. Furthermore, an educational garden with Mediterranean herbs was created.  Currently, over 40 varieties of herbs and over 800 plants are growing in the Razejunge Vineyard. To bring out and exhibit the unique cultural landscape of the Lower Moselle area, especially to young people and children, the Razejunge also set up a “vineyard adventure trail” in the summer and autumn months of 2017.

A well-visited rest area with vine pergolas, benches, and loungers completes the unique facility directly on the Moselle Bike Trail. The Razejunge were involved in the construction of the touristic themed path called the “Würzlaysteig.” The Razejunge also promote the Lower Moselle region and take part in various conservation activities.

Since 2008, the Lehmen Razejunge have been organizing the “Razejunge Wine Sampling” at the opening of the Lehmen Wine Festival. The Razejunge are an integral part of village life. They represent the wine-growing community of Lehmen, take part in festive processions and wine festivals, and, with their activities, make the Lehmer Razejunge known across the regional borders.

The community of Lehmen has acknowledged the commitment and contributions to the local community by naming the village square after the Razejunge and installing the Razejunge emblem on the side gable of a house on the Razejunge Square, which is visible from afar. Since 2011, the organization has repeatedly received awards for civil engagement, climate protection, and biodiversity.

Where does the name Razejunge come from?

The term Razejunge is derived from the working tool, the Raz, a woven basket that is worn on the back. With this, the males from Lehmen (Junge) would transport the manure from the stables to fertilize the vines in the steep vineyard.

The so called Raz is made from stripped hazelnut branches. The hazelnut branches are split and then boiled in hot water. Afterwards, the crop is skinned. The Raz is woven from this raw material. The Razejunge of today have built original Razen in accordance with old tradition and have extensively visually documented the steps.

Lehmen was first mentioned in documentation in the year 865 AD. It had developed from a wine growers’ settlement into a craftsman’s village by the beginning of the 19th century. The occupation of a stonemason became a very important profession. Because there was not enough work for all the villagers, many men had to earn a living for their families away from home. During the winter time, they returned home to Lehmen.

But even in the unemployed winter months, these people had to earn a living. The men and boys found work in the vineyard. They carried baskets of manure on their back to fertilize the grapevines in the vineyard. The Razejunge were first documented in the church registry of the upper parish church of Lehmen (Ober Pfarrkirche zu Lehmen) in 1784. The carrying of manure became a winter job and extra source of income for the boys and men.

Before the work began, they negotiated pay with the vine grower. For each basket that was carried, a notch was carved into the handle of their walking stick that they used as support when walking up the steep vineyards. This way, the Razejunge could easily keep track of the number of baskets that have been carried by the end of the day. A basket of manure weighed about 30-40 kg and contained enough manure for about 6 vines. They carried the filled baskets up to the highest point in the steep vineyard around 8-10 times per day. Neighboring villages gladly employed the Razejunge, because the carrying of manure was frowned upon. The Razejunge were paid poorly for the heavy physical work. The reward for this work enabled them to be able to celebrate their Saint Castor Festival in late January/early February. Even today, the Razejunge maintain this old tradition every 4 to 5 years and carry the manure with the basket on their back into the vineyards to fertilize the vines.